The first is from the back cover of The Way of Spider by W. Michael Gear, 1989. The art is credited to Sanjulian. Other than adding wings and a tail, removing the landing pads, and distorting the appearance of one of the landing pods, it is absolutely recognizable as a head-on view of an Eagle, even down to the Alpha Moonbase logos on the sides of the pilot module.

Note: The Eagle's angle and proximity is virtually identical to an Eagle in the opening scene of "The Last Sunset" -- though this may not be the only episode.

Besides the Eagle resemblance, the thing on the bottom reminds me of a load hauler from "Aliens" -- but I haven't seen that movie for awhile, so I'm not certain. Also, the front cover (not shown here) has someone holding a helmet that looks like a Viper pilot's helmet from Battlestar Galactica (the 1970's version).

I've seen another book with cover art by Sanjulian, and it had similarly recognizable elements--the only such element I remember offhand was a ship I thought looked like Ardala's Draconian battlecruiser from Buck Rogers in the 25th Century.

If nothing else, the Eagle case above looks like one possible way to make the Eagle a more glideable craft!

This one is part of the front cover of Journey, by Marta Randall, 1978. There is no artist credit for the cover, that I could find. Obviously, it would seem like a more distant possible derivative, but in my opinion, does share too many recognizable elements to be coincidental. 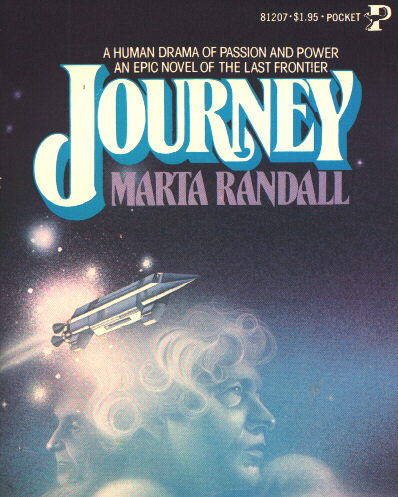 From: bluelarkspur@webtv44.net Date: Mon, 8 Sep 1997 05:18:55 -0500 Subject: Space1999: OT-The Stand's "Moonbase Alpha" ..."Tom had built a strange but somehow compelling terrain-contoured landscape that covered nearly half of the floorspace of the Holiday Inn's main function room; he had used papier-mache, plaster of paris, and various food colorings. He called it Moonbase Alpha"...

In an episode of 24 originally broadcast in late February or early March, 2005, a fictional Los Angeles-area company had a logo comprising its company name integrated with what immediately struck me as a vertical-elevation outline of Moonbase Alpha (MBA).

In the following snapshots, the MBA outline, from Space: 1999 itself, was added, in red, by an S19 fan, for comparison. (Note: These are not my snapshots nor my editing to add the red outline; but I cannot seem to find out where they came from at the moment (sorry). If they are yours and you wish me to add attribution or remove them, please contact me.)

The similarity is undeniable, in my opinion. 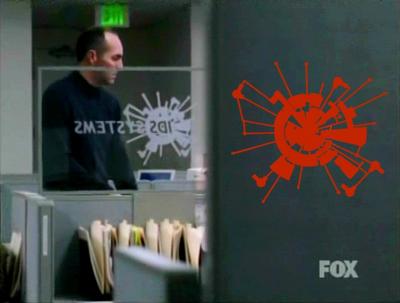 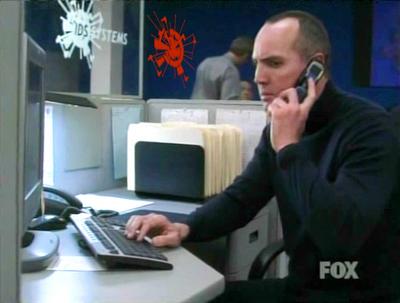 "Browsing through a toy store in Zurich made me find this Toy, called Space Shuttle and produced by Kosmos. Kosmos produces toys with a scientific touch. This space shuttle is actually a pipe with two little balls which can float above the shuttle by blowing the pipe."

Transporter also indicated that "the toy is not produced anymore." 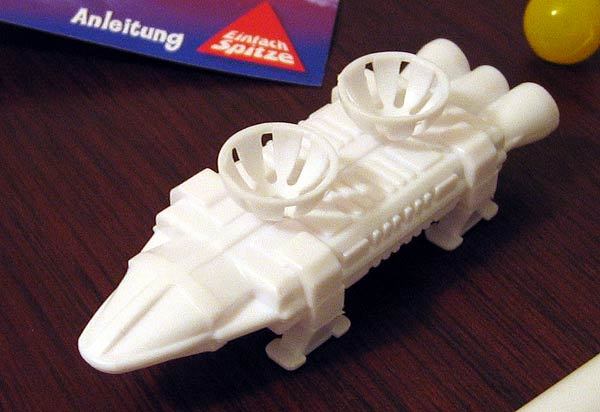 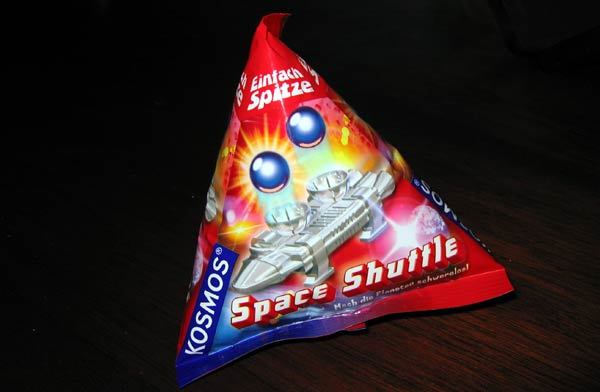 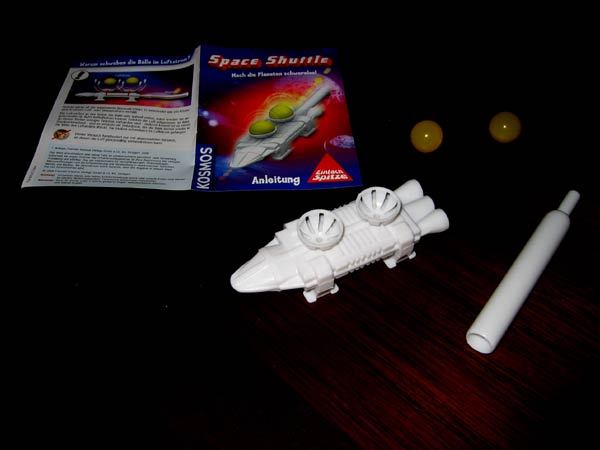 Thanks to Transporter for providing the three pictures.

This one is a even more distant in 'look' than the other Eagle cases above, but does seem to have several elements of partial similarity, despite the comparatively flattened and otherwise different features.

In an episode of Futurama, the influence of Star Trek (The Original Series) has grown too great for society to tolerate, and it is outlawed. Most sets of copies of episodes are destroyed, while the last set of copies are shot onto a distant planet. The ship doing the firing? One that very closely resembles an Eagle. It has viewports fused into a single "monocular" appearance, and has more of a rounded look, but otherwise looks virtually identical.

[Have an image somewhere; need to find it.]

Back to S19 Miscellaneous Odds and Ends page